I posted an announcement to the “Formula Two: The “New Look” to my Instagram and added a couple of personal examples.  The conversations and questions that followed in comments inspired me to write a separate blog entry on this topic.

One of the Instagram readers commented that she rushed to Maje, tried on a skirt and what she saw in the mirror left her discouraged and confused.  She said that the skirt made her hip line look very defined and much more pronounced than in skinny jeans.   She lamented having a hip emphasizing mermaid effect… and asked for reassurance.    The fact that modern woman is so distressed by the mermaid effect of her hip line is the saddest news since the start of World War Two…

I meant the  “New Look” formula  as a tribute to soft, feminine, Siren beauty.  The point of the heavy jersey mid-calf skirt and the entire look is to put the quintessentially feminine snake-like line on display and allow it to shine in all  its glory.   Women of today are so preconditioned by straight, masculine lines, they get discouraged the moment they see soft, feminine contour.   I guess my mission is to have women stop apologizing for having hips.

One of my recent clients Anna, with whom we have been working on the same Maje skirt for a couple of weeks now, has kindly agreed to share her snapshots here. 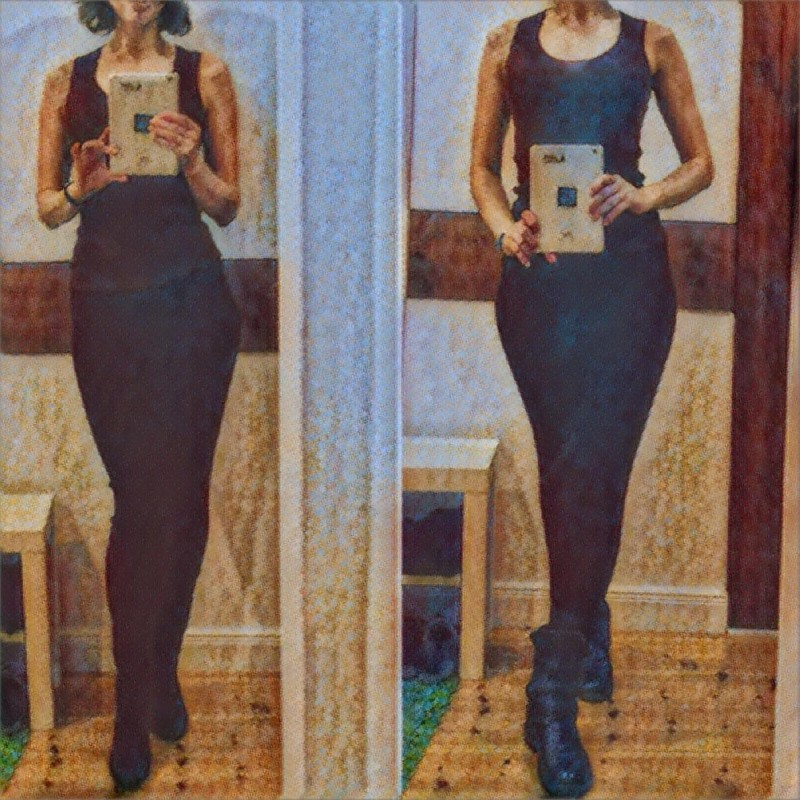 These examples show the versatility of this heavy jersey midi  as  it gracefully  transfers from classic “New Look” formula into post Industrial  gender-bending images. Anna has a typical Siren body, fragile on top with generous hips, which does not fit into the overwhelmingly androgynous modern fashion template.    When upon my suggestion she tried the skirt for the first time, she reported the same state of confuse as my Instagram reader did and said she felt  “decidedly undressed.”   Jersey does have this undressed effect on everybody, but  we actually want to hold on to it because this is  – to quote late Leonard Cohen – is the crack that lets the light in.  It allows us to widen variety of laid-back modern shoe-wear and various silhouettes, which we can’t bring into our style with a non-jersey midi.     Anna also felt her hips looked much more pronounced in the skirt and she felt wary about it.  I had to reassure her that she is on the right track and just needs to keep adding the right shoe-wear and tops to give her beautiful body the frame it deserves.

These snapshots capture her third iteration with the skirt, when the right satellites finally made her see the beauty of her body.     Yes, those childbearing hips will be more pronounced in the snug heavy jersey than they are in jeans, because denim is all about androgyny, while this skirt is the modern take on the  “New Look”  – an epitome of femininity.  And femininity is hips.

My goal with this look is not to hide feminine hips; my goal is to make them look beautiful.  And for that they need to be visible, don’t they?    Then we will bring in all the gear I talked about with such passion in the last entry:  the blending shoe-wear, the importance of the midi-length, the cropped chunky sweater with the medieval-knight like neckline creating a right amount of volume or a peek of bare skin, which works the same way those voluminous, structured tops do.  Anna’s snapshots are an interesting example of this. During our follow-up conversation she asked me how come she ended up with such great outline despite the fact I so insisted it was voluminous, cropped top that makes her generous hipline look graceful.   Well, this is the magic of bare skin.  I did not talk to her about a wife-beater because we concentrated on winter looks, but by experimenting on her own she expanded the skirt use into Spring and Summer combinations and witnessed the magic power of bare skin.   It creates a very powerful visual focus which  balances out generous hips.   No simple sweater will get you to the same destination.   You really need an artful piece of knitwear in which designer put as much love and wisdom as Mother Nature put in a woman when she created her.