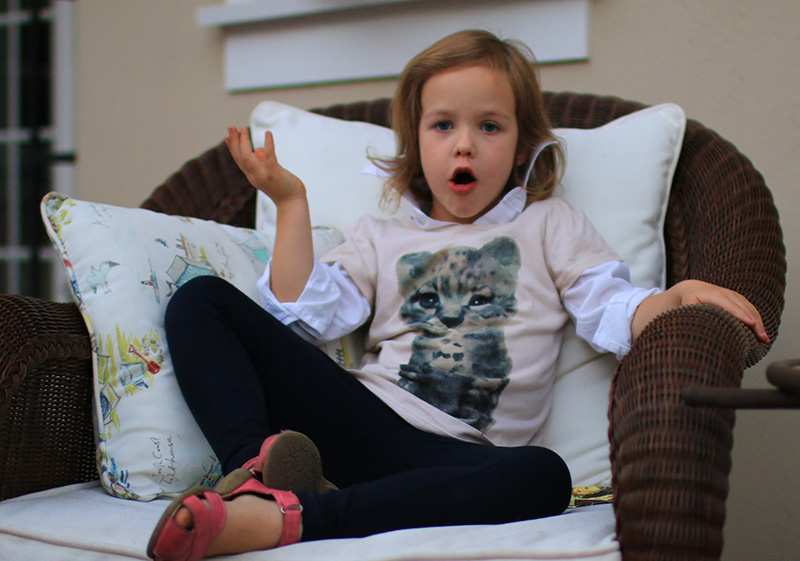 In the evening we lay out an outfit for my daughter to wear the following day in kindergarten. My reign is over and she makes her own choices. I serve as the advisory board. Yesterday daddy put the kids to bed and he is a much more lenient advisory board. By the time I got upstairs for an evening recap I found the unspeakable laid out on an armchair: leggings and a tee. I am an opportunistic dresser; I believe anything can be worn as long as it is played out well. In my book leggings and a tee is nothing more than a frozen dinner that needs to be warmed in the oven and seasoned well. I, for one, do not consume frozen anything, but I can let a frozen something into my life here and there, providing it’s warmed in a gas oven and well-seasoned. Leggings and a tee is a frozen dinner eaten as is. And my daughter wants exactly that. I rebel. I rebelled a year ago, but I did it wisely. Or at least I thought so. If she wants to wear leggings and a tee she can do so, as long as she is wearing a crisp white shirt underneath her tee. For that I bought her H&M tees two sizes up and have her wear a boy’s crisp white   shirt  with a notched up collar. This adds structure and makes her little outfit actually an outfit. Very Leandra Medine, by the way, isn’t it? Well, that trick worked for the last twelve months and ended yesterday.

Sylvia did not want to wear her crisp white shirt under her comfy tee. She wanted her tee and her leggings as is. Understandable. All the girls in kindergarten are dressed like that. We negotiated for fifteen minutes with neither side winning. Eventually I said ok, I see that this is important to you, and I will let you wear your tee with your leggings but remember, I don’t like it. At that point Sylvia broke down in tears. I tried to reason to no avail. Sylvia was desperate. She wanted to wear her leggings and her tee sans crisp white shirt and she wanted me to like it! I was torn between how I wanted my daughter to project her image and how wisely I was using my temporary status of a rock star whose approval is everything. We were both desperate. We cried and talked a little bit more. I hugged my five year old and told her that I love her no matter what, even without a crisp white shirt with a notched up collar underneath her tee with leggings. She replied with a “thank you” that sounded so adult, it made me shiver.